The post-workout supplement that will maximise your workout results, minimise recovery time, and eliminate muscle soreness.

✓ No artificial flavours, colours or sweeteners

Want to recover faster, grow stronger, and ache less after your workouts ?

Built upon a vital base of amino acids, BCAA Matrix uses a range of special ingredients to make sure you get the nutrition you need after your workouts, helping you to recover faster and grow stronger.

What can BCAA Matrix do for you  ?

BCAAs are the amino acids which are most important for the growth and repair of skeletal muscle: Leucine, Isoleucine and Valine.

They significantly boost protein synthesis and can also reduce muscle soreness after workouts. (1.2.3)

Glutamine is another amino acid which is beneficial for muscle mass.

It is strongly correlated to muscle protein synthesis and may have useful amino-acid sparing effects that counteract catabolism. (4.5)

HMB is a metabolite of Leucine, which can protect muscle mass and increase its development. It also has some fat-burning effects.

HMB is great for fat-loss and increasing strength. (6.7.8)

Citrulline Malate acts as a vasodilator, by increasing levels of nitric oxide. Vasodilation is a widening of the blood vessels, which improves blood circulation and speeds up the removal of toxic compounds from the body. (9.10.11)

Beta Alanine is a beta amino acid. It is used by the body to produce Carnosine, a compound that reduces lactic acid and free-radical build up. (12.)

Taurine has a variety of health benefits, both mental and physical.

Two of its most important effects when used post-workout are its ability to quickly replete our muscular energy stores and increases in fat oxidation. (13.)

Magnesium can play a role in the reduction of fatigue and tiredness.*

It is also a very important contributor to the process of protein synthesis. (14.)

Cinnamon can improve the body’s ability to utilise carbohydrate energy. It slows its conversion to glucose, ensuring that carbohydrates are used primarily for energy, rather than unnecessarily increasing blood sugar levels. (15.)

Please find the references in the detailed description tab.

They’re essential amino acids, which are vital for the growth and repair of skeletal muscle. The human body can’t produce them on its own, thus they are required via food or supplementation.

Studies also show some promise for them to reduce delayed-onset muscle soreness, after intense workouts.

It is optimal for these amino acids to be used in a 2:1:1 (Leucine:Isoleucine:Valine) ratio, due to Leucine’s depletion of the other two amino acids. [1,2,3]

Glutamine is another amino acid, which is also well-known for its ability to improve skeletal muscle growth and recovery.

Studies have shown a positive correlation between glutamine levels and rates of muscle protein synthesis. Research has also shown it to have an amino acid-sparing effect in hypercatabolic subjects, preventing important amino acids such as Leucine being expended for energy. [4,5]

HMB (HydroxyMethylbutyrate) is a metabolite of Leucine which can improve protein balance, strength, and lean body mass, when combined with exercise.

Strength athletes and bodybuilders commonly use HMB to increase strength and muscle hypertrophy. These effects are well-documented, with trials demonstrating increases to limb circumference, leg strength, and grip strength.

Such benefits are not limited to the athlete population. These effects are also much sought-after by the elderly, for whom an increase in strength and/or reduction in bodyfat can make an appreciable difference in daily life.

In addition to its strength-enhancing effects, HMB supplementation also increases oxygen uptake, as well as making improvements to hormone balance and intramuscular enzymes. This myriad of benefits can be beneficial not just for athletic ability, but general health and wellbeing. [6,7,8]

Citrulline Malate is a special form of the amino acid Citrulline, which plays an important part in the urea cycle.

It acts as a vasodilator, by increasing levels of nitric oxide. This dilation of the blood vessels improves blood circulation and oxygen supply, and speeds up the release of toxic substances from the body. This cleansing of the system can accelerate recovery and significantly decrease muscle soreness.

Citrulline can also enhance insulin sensitivity, which can lead to improvements in lean body mass. [9,10,11]

Beta Alanine is a beta amino acid. Supplementing with Beta Alanine increases Carnosine concentrations in skeletal muscle by 20 to 80 percent. Carnosine is important for reducing muscular fatigue, through its ability to expel toxic by-products of exercise from the body.

Research shows that Beta Alanine supplementation is most effective for improving performance in high-intensity intermittent exercise, such as weight-lifting or sprints. [12]

Although Taurine has a wide range of health benefits – both mental and physical – one of its most useful effects post-workout is its ability to enhance glycogen repletion in skeletal muscle.

Glycogen is the form in which our muscles store carbohydrate energy, which can quickly be accessed during exercise. This ensures the muscles are quickly recharged with energy for your next workout, or general use the next day.

Magnesium is an essential mineral. Supplementing with Magnesium can combat fatigue syndrome and improve energy use during exercise, as well as improve protein synthesis.

Studies show that those with a low dietary intake of Magnesium typically have reduced levels of vital minerals in the blood, resulting in less-than-optimal muscle function and athletic performance.

Further research has demonstrated the importance of Magnesium for protein synthesis. One particular study showed significantly greater increases in strength development for its Magnesium-supplemented group relative to placebo. [14]

Cinnamon Extract is a powerful blood-glucose regulating agent, made possible through its positive influence on insulin sensitivity.

It is very effective for maximizing carbohydrate use, and preventing unnecessary rapid increases in unutilized glucose levels.

Such effects may be complementary to those provided by Taurine for glycogen resynthesis. [15] 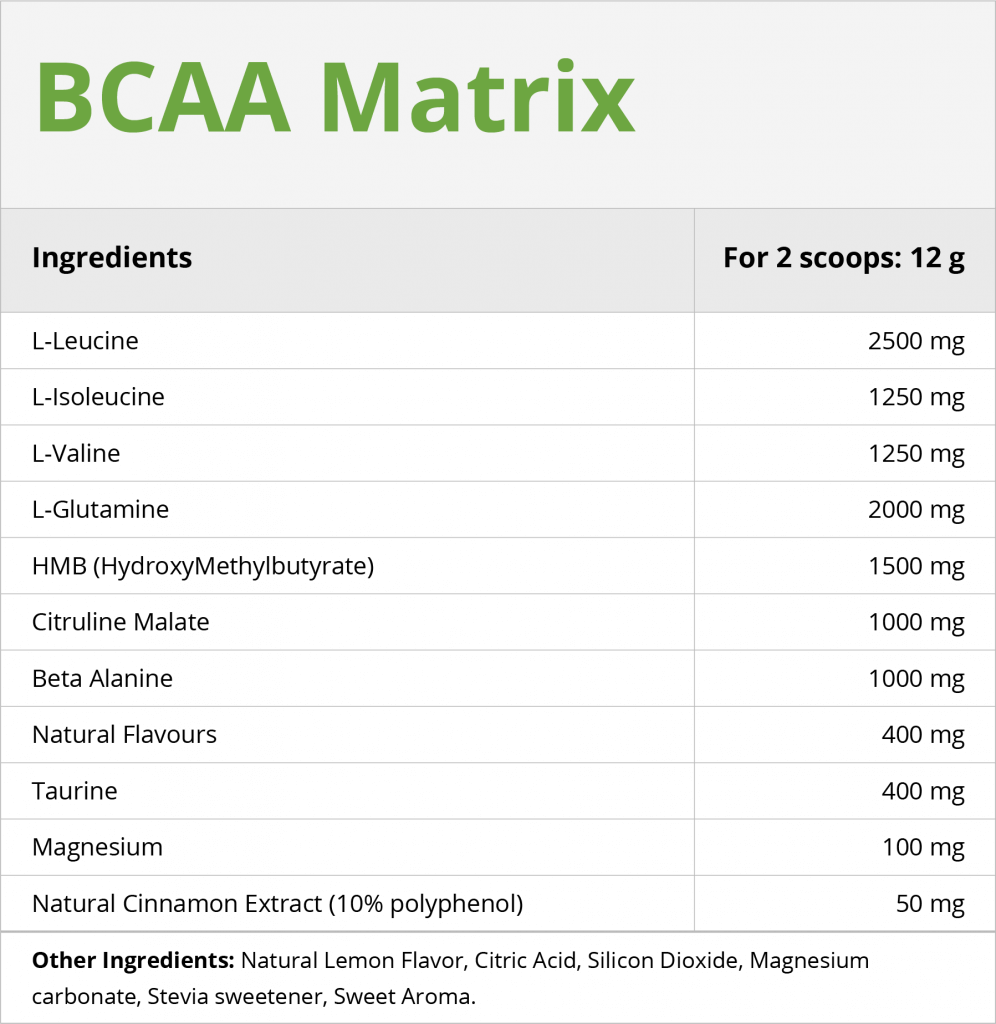 As a dietary supplement, mix one serving (2 scoops) into 200-300 ml of water and drink after training. For best results use pre-workout before training. Use BCAA Matrix for 25 days followed by a 5-day break and then recommence.

Food supplements should not be used as a substitute for a healthy balanced diet. Do not exceed the recommended daily dosage. Keep out of reach of children. This product is not intended for use during pregnancy, breastfeeding, or by persons under the age of 16. Consult your doctor or pharmacist before use. Store at room temperature, away from direct sunlight.

There are no reviews yet.

Only logged in customers who have purchased this product may leave a review.